Double Tonguing on the Oboe

Double tonguing on the oboe isn't magic,  nor is it really difficult.  But it does take time to learn. In fact, the two most important ingredients to learning how to double tongue are PATIENCE and PERSISTENCE.   Add in a really light reed and you'll be double tonging on the oboe in no time. I've been meaning to write this post for some time,  and thanks to a fine oboist and friend who asked about double tonguing,  I'm finally sharing this with you. (Thanks KPK!!! :)

So, first what is double tonguing?  Good question!  Double tonguing is a method of articulation where your tongue alternates between touching the reed and your hard palate (the roof of your mouth).  It can facilitate rapid articulations and should be used when you are unable to maintain single tonguing speed with clarity.

First,  let's find the right placement of your tongue.

Notice that you use the middle-back portion of your tongue.  Compare this to KA, Kuh, or Ga/Guh sounds,  which are often taught with double tonguing. I think the KI sound works best for oboe double tonguing because the tongue is in a more forward position on the roof of the mouth than when you say GA or KA.

Next say, ti-KI-ti-KI.  But,  to get the best practice,  say "ti" with an oboe embouchure, exactly where you would articulate if you had a reed in your mouth (lips brought forward,  and your tongue touching the bottom part of your top lip that is rolled over your top teeth--Hope that's clear! )

Here's a sound clip of me saying ti-KI-ti-KI:


KI and TI on the REED ONLY

Next, work with ONLY the reed. It is ESPECIALLY important to use a REALLY light reed with a very thin tip.  It a very thin tip isn't your normal style, you'll need to scrape your reed a little more for these exercises.

First articulate on the reed using a "KI" articulation only.
Use lots of air and a very quick tongue. At first this might feel awkward and "thunky." Keep the tongue motion as light as possible. Say KI again.  Then KI-KI-KI-KI.  Be patient with yourself,  and remember to use a very LIGHT reed,  lots of air,  and a quick tongue that is propelled by your air.  Once you can consistently articulate KI,  move on to the next step.

Second, articulate saying ti-KI and KI-ti on the reed alone. I think that the "KI" articulation must be MUCH stronger than the "ti" articulation because "KI" isn't touching the reed.
Practice the following exercise:

1. While forming an oboe embouchure, say: :"ti-KI"
(Make sure your tongue placement of the "ti" is exactly where you would articulate if a reed was in          your  mouth or this won't be a useful exercise!)

2. Articulate on the reed alone: ti-KI

Then,  put on a metronome to a SLOW speed (quarter=60?) and articulate 16th notes on the reed only: 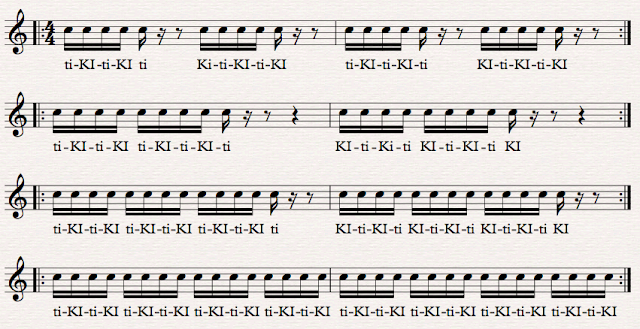 Take frequent breaks if your tongue is getting tired.  Be PATIENT with yourself, but be persistent--practice these exercises daily for 10-15 minutes until you can do this with ease. You want to be able to begin an articulation sequence on either a ti or KI articulation.
Next, slowly move the metronome tempo faster until you can articulate on the reed at quarter note=130+

It's important that you don't move to our next step until you can consistently articulate clearly, cleanly, and in time with the metronome.

DOUBLE TONGUING EXERCISES with the OBOE

Once your air, tongue, and reed are coordinated, add in the oboe. I've specifically written these exercises to encourage you to not simply double tongue on one note.  For some reason I've found that the hardest transition for me was coordinating my fingers to move on the "KI" articulations. Hopefully these exercises will help.

Try these exercises at quarter note=60,  then slowly move them faster until you can play them as fast as you can!

Again,  patience and persistence are key.  Repeat each line and take frequent breaks.  Don't move on to another line of music until you have mastered the lines before.   Practice these exercises for 10-15 minutes daily and keep track of your metronome speeds so that you can measure your improvement over time.

I look forward to hearing from you and answering any questions that arise as you practice double tonguing.  Or,  contact for me for a Skype lesson to troubleshoot any difficulties that you have.